Badges I have collected throughout the project, many varying with certain school work and others with mini projects.

Habits of Heart and Mind

In the Steampunk Revolution project, I had developed two different Habits of Heart and Mind. Refinement and Cooperation. I feel like I have grown in both because during the process of writing our monologues, we had to undergo a lot of critique from others on how we could best explain a certain event from history in our monologues. We would get critique from Ms. Sara, our groupmates and even the "Rally" group who would be doing a small speech to perform as well. In the beginning, Ms. Sara had told us that we had to find our "pot of gold", which meant that we had to find a specific piece of research from our issue that could best shape our Monologues. I couldn't find my "pot of gold", so I kept looking. I kept doing research and I kept looking for it. After I had finally began to shape my monologue, I realized that my "pot of gold" was my actual monologue. I had felt really proud about what my monologue had to say about the issue of "Women's Rights" and how, after all of the critique sessions that we had, it was reflected how much I had spent refining my work until it was "Exhibition" worthy. Refinement taught me that even though there might be times I don't know how to change something or how to be able to understand something more clearly, I still have to keep searching, keep changing and keep refining in order to finish with the amount of work I feel proud of. Cooperation helped me as well whenever I needed to talk to my group about our monologues, about schedules with when we could practice and when we would be critiquing each other's work. I had started to grow in this skill in the beginning of the project, but I feel like as I moved on with the project and started to make connections with people, I realized that it is important to work together in order to finish something and find a small reward in the end. You are able to teach yourself a valuable lesson whenever you work with someone new.

Gender roles have been affecting how men and women compete for work since the 1980’s. Since then, women have been told to work at home and take care of children, while men went out to work in factories, alongside children, who worked in coal mines. Women equality has been active in certain parts of the world ever since the Industrial Revolution. Because women are judged based on their physical appearance, they aren’t allowed to work in factories until the Industrial Revolution hit and men were sent off to the war.

Women, because of the change in the laws, they were wired with more work outside the home and inside as well. They were forced to work in factories, manage the textiles and very “easy” parts of the factory, while coming home, were forced to clean the house, make food for the children and husband and take care of the children. Home life suffered as women were faced with the double burden of factory work followed by domestic chores and child care. By then, women had taken over men’s roles in the factory while they were out in the war.
---
For my monologue, I had to research about women and their roles during the Industrial Revolution. It took work trying to find articles on women in the factories, women working outside the home and how gender roles changed since then. All articles I had found before were based on when women would work inside the home, not leaving the house, and having to care for children. I had found it interesting looking for information on a topic like this, but this topic was really interesting for me because it talked about how women were treated differently due to stereotypes towards women. It has really shaped now and we can see, that now, more women are working outside the home in order to bring more to their family. Their confidence has been boosted and they are now free to work outside without having owners judge them, like before the Industrial Revolution hit.
---
WORKS CITED:

To earn my Streampunk Badge, I needed to come to school with my costume. It had to be whatever I had and I needed to get it approved by the "Steampunkers." We had visitors come to our school, and they taught us about dressing up as a Steampunk Character, how to create your character and costume planning. That was in the beginning of the project. In this part, we needed them to approve whatever part of your costume you had to be able to earn your Steampunk Badge. At that time, I had victorian-like heeled boots, ripped black jeans, a white tshirt, a tank-top like corset, belts, goggles, and little extra sewings on top. Everything was embedded into my costume, somehow, using hot glue or sewing. The Stempunkers needed to approve of how well my costume was, how much craftmanship was in, if it was creative and if it had some kind of victorian element. With all of those checked off, we were able to earn out Steampunk badge. Below, I have a picture of the Steampunk Badge form the Steampunkers filled out. 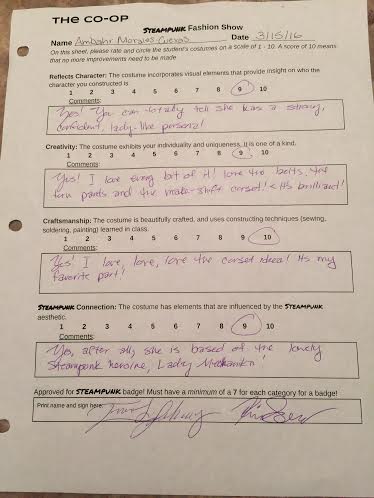 Before we worked on our costumes or even dove even deeper into the project, in Ms. Sara's class, we learned about the Industrial Revolution. The positive and negative effects it had. About enviroment, social classes, economy, urbanization, gender roles/women equality, health, and many more. During these topic disscussions, we were able to find one that most interested us and which one we would then write an essay about. I chose Women's Rights/Gender Roles because I thought it was the most interesting when it came to learning about why women weren't accepted when it came to working outside the home and why women were often pushed down for being weak and having no ability to work.

During this process, I was able to learn about how to cite my sites I found, about how to search the web carefully and how I can find the most reliable sources online without having to go to Wikipedia all the time when looking for information. As I went through the process of finding reliable sources, I also found many interesting facts about women and how they were treated back then vs. how it has changed the way women work now. It's a very important skill to learn and it will help in the future whenever you need research.

Earning my Acting Badge was part of many class activities in the morning. Ms. Sara would teach us different components of Acting and how we needed to always keep a straight face, no matter what happened. She would challenge us to do many activities, some with partners, others by ourselves, but they always improved how we needed to act during the night of exhibition. Since I was in the Monologue group, I knew I needed the Acting activities, so I took note of them and tried my best to actually interact with them instead of ignoring them and not caring whether or not I participated. One of the activities was based on having to mirror another person's movements and not being able to tell who was leading and who was following. It took a lot of practice having to get it right but it taught us a valuable lesson when it came to how to move on stage and with another partner. Another one that was memorable to me was having to create a scene without any script in mind. It was whatever came to mind, we had to act it out. During the scene, anyone from the group outside would have to say "freeze!" and we would stop. Then they would switch with any of us and start a new scene. It would keep going until everyone went on. It taught me how to improvise when you are acting and somehow forget what to say. In exhibition, I had to say my monologue in front of an audience and be able to explain what it meant in the end. Acting during this meant no laughing, keeping a straight face and being able to show emotions through your tone in your voice and through your facial features.
Powered by